Given the unpalatable nature of reality, separatists tend to deny economics and appeal to raw emotion. This tactic is effective but divisive.

The bullying conspiracy against Scotland that has been conjured up in the popular imagination loses no potency by virtue of being nothing but market forces dressed up as a pantomime villain. Tribalism is immune to reason.

Since a large minority will remain passionately opposed to either outcome of this referendum, divisions will be slow to heal. In a future crisis we shall be tempted not to pull together but to blame our neighbours who foolishly voted the wrong way.

We should have learned from history that a common legacy of unrealistic expectations is social conflict and a search for scapegoats. Inside or outside the UK we are going to suffer for the disunity that has been so recklessly fomented.
Posted by Philip Brian Hall at 11:19 No comments:

Scottish Independence - A Dialogue of the Deaf

Recent triumphalism from separatists claiming to be winning the argument is frustrating to people actually trying to think through the problems of independence. Rational discussion has not even begun. To date the so-called debate has been an emotional pantomime in which every claimed disadvantage is met by cries of "Oh no it isn't!" and little else.
To stress the risk of losing what we already have is not negativism. We have obtained certain advantages through the union. It is for separatists to explain either why we shall not be putting these advantages at risk or why it is worth it. Yet all we hear is flat denial of troubling claims such as those made by:
1. The Chancellor of the Exchequer, the Chief Secretary to the Treasury and the economic spokesman of the Labour party, who say that there will be no sterling currency union because it isn't in the UK's interest;
2. The Governor of the Bank of England who says that a sterling zone would require some ceding of national sovereignty in order to avoid the sort of financial instability that has hurt the Eurozone;
3. The Prime Minister of Spain and the President of the EU Commission who say that Scotland will not be an automatic member of the EU and will have to apply;
4. Economists who suggest that a refusal by Scotland to accept its share of the National Debt would lead to downgrading of our credit rating and a rise in our interest and mortgage rates;
5. The Institute for Fiscal Studies which says that oil revenues have been overestimated and Scotland cannot afford even current levels of public spending;
6. Financial institutions which have indicated that they may have to move south because regulations require their headquarters to be in the same jurisdiction as their largest market;
7. The Defence Secretary who says there is no guarantee that future UK contracts for warships etc. will be placed with a foreign country;
8. The former Secretary General of NATO who doubts that Scotland will be enthusiastically welcomed into the organisation whilst evicting Trident, an important part of NATO's defence strategy;
9. The Institute of Chartered Accountants in Scotland which has warned of major uncertainties for pensions after independence;
10. The Home Secretary who says there will have to be border controls and passport checks because continued free travel is incompatible with Scotland encouraging immigration whilst the UK discourages it.
These are just ten examples of warnings to which the standard response has been denial and accusations of bluff or bullying but not facts.
Let evidence now be brought forward. Let us hear detailed reasons why all these well-informed people are wrong. Until such time we may reasonably doubt that a rational, unemotional argument for independence has even been made, let alone won.
Posted by Philip Brian Hall at 22:52 No comments: 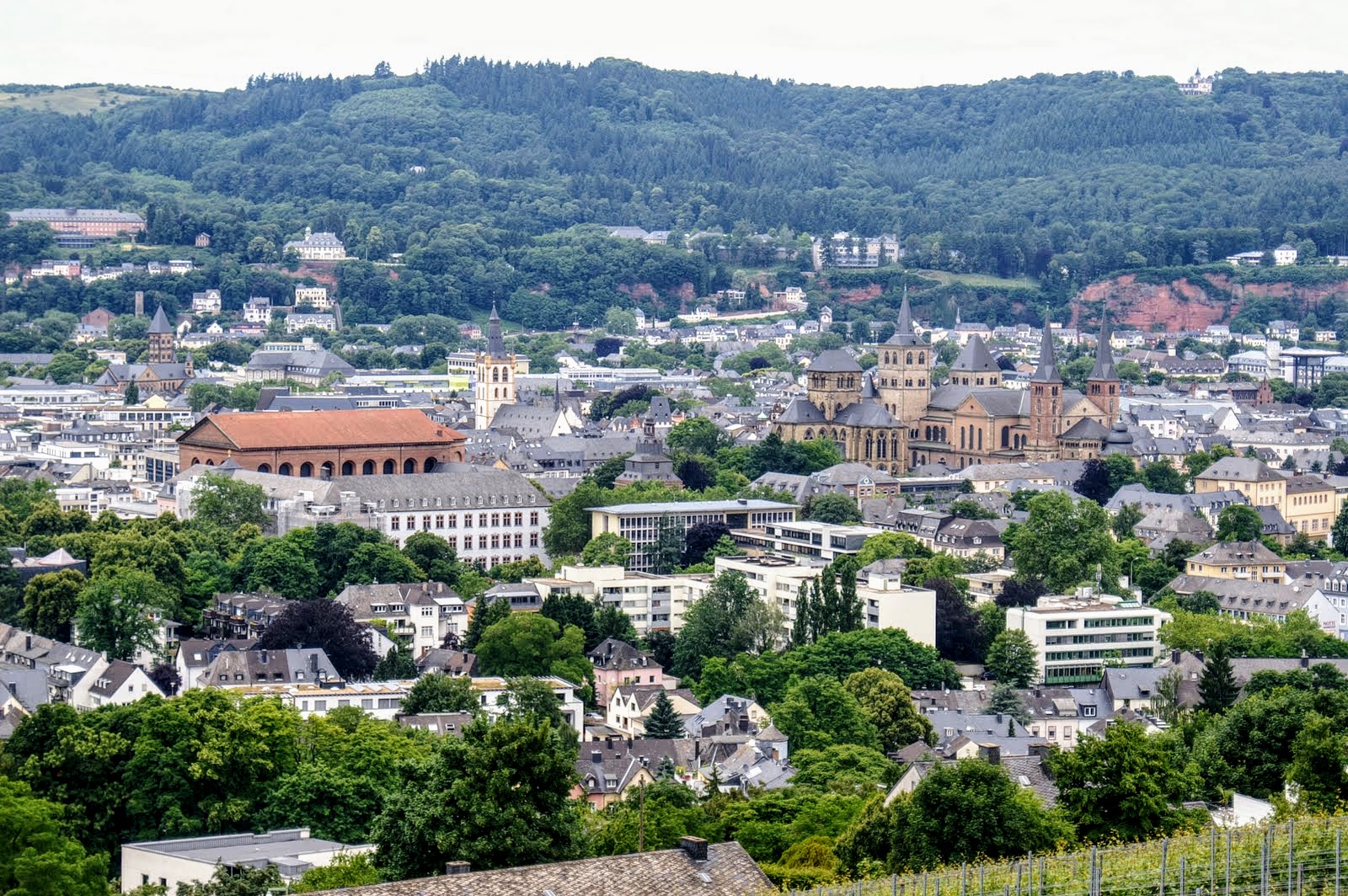 Possibly the oldest city in Germany, Trier (or Treves in French) was the administrative centre of Gaul in Roman times and one of the largest cities in the known world.

There are three Roman baths here (see below)  and a huge basilica (left, left centre) that is today in use as a protestant church. An amphitheatre also survives, at least in terms of having left its shape in the ground, as well as a bridge across the Moselle that was built in the second century and still carries traffic. 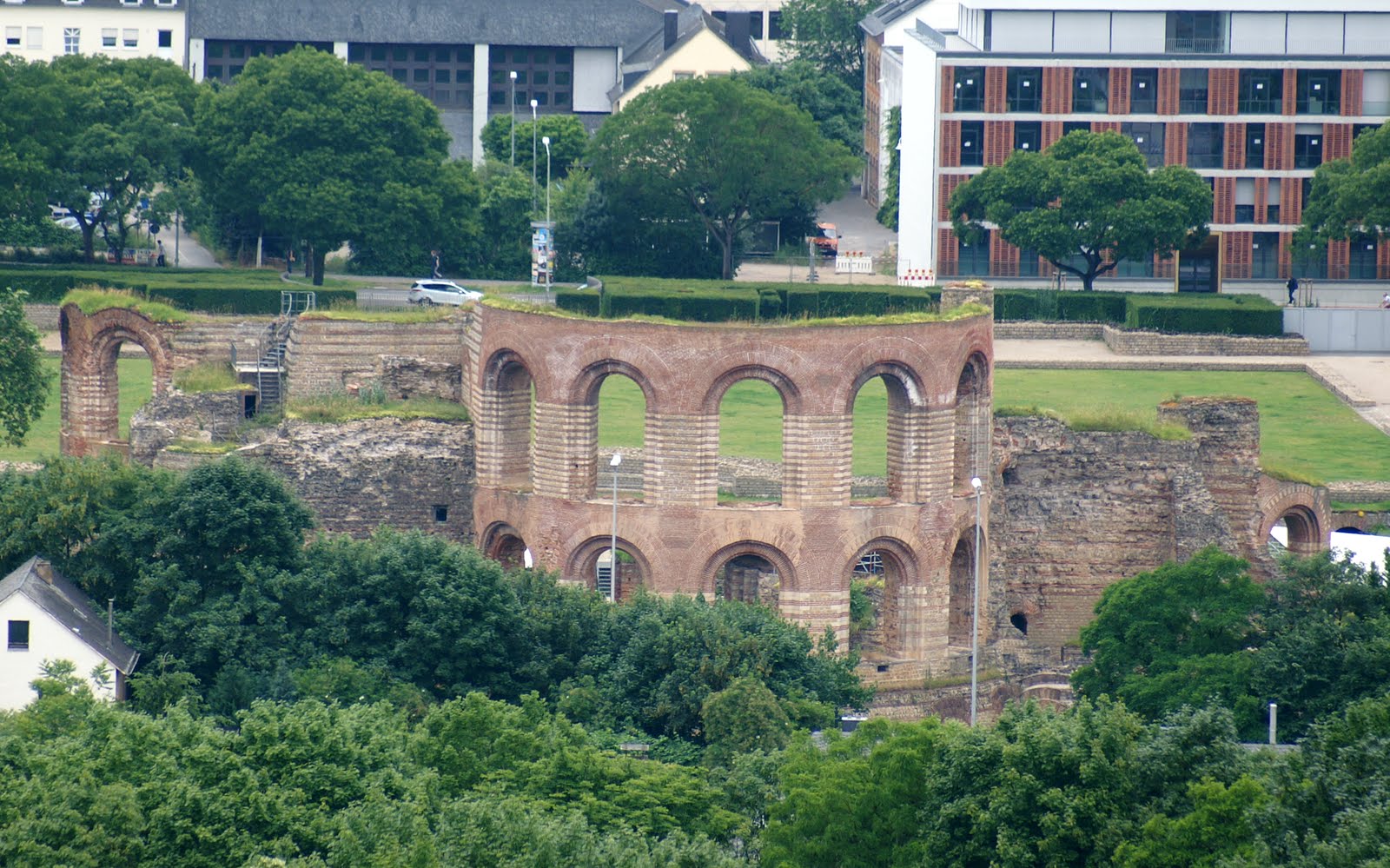 The Dom or Cathedral of St Peter also was founded in Roman times, (above, right centre) whilst the  Liebfrauenkirche next door is in the French Gothic style.

The Archbishops of Trier were important princes of the Church and Electors of the Holy Roman Empire. 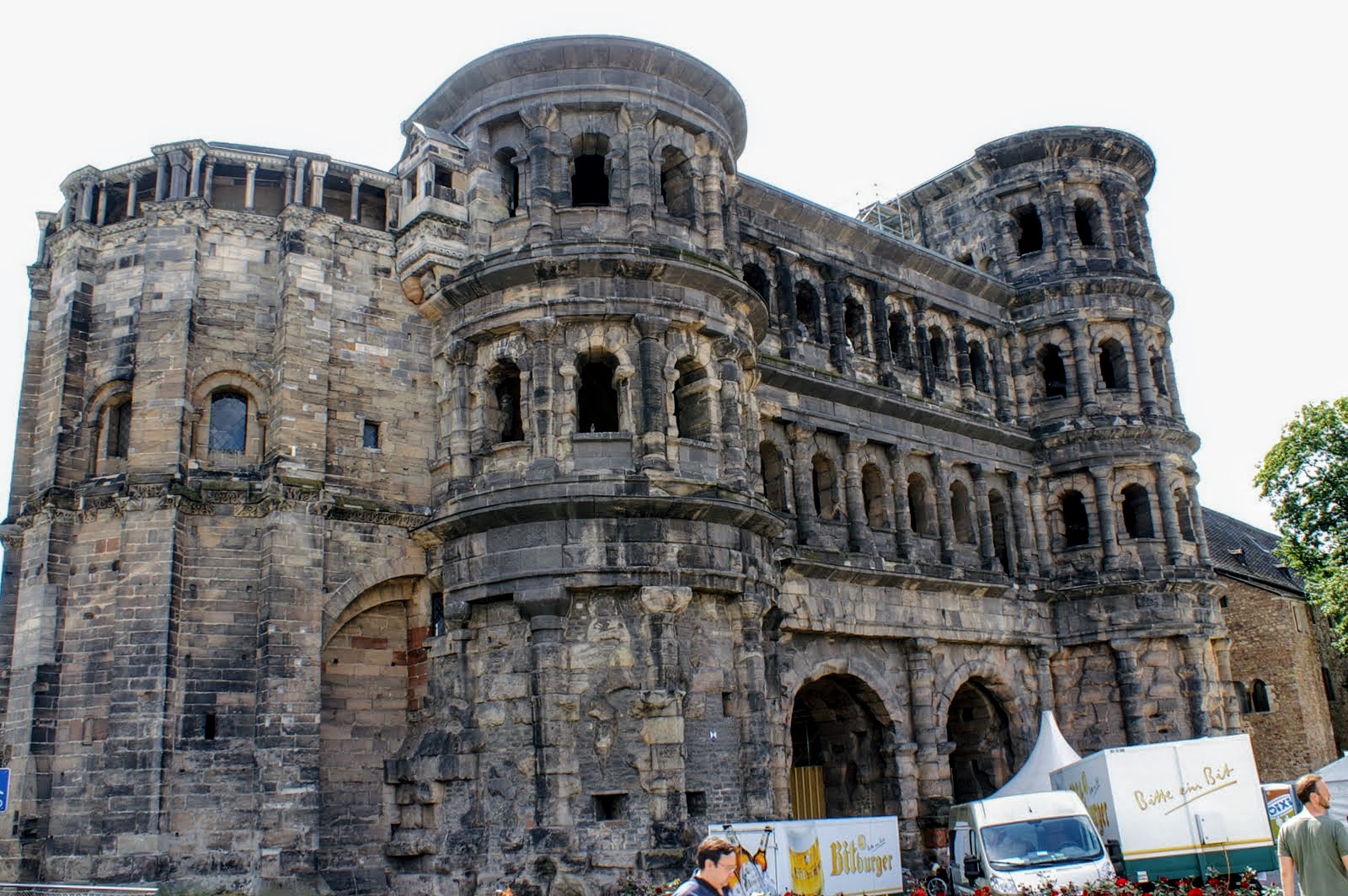 Its famous Black Gate (Porta Nigra) is the best preserved Roman city gate in Northern Europe, though it was tricky to photograph during our visit because a major festival in the city was using it as a stage for a pop concert.

Karl Marx was born in Trier in 1818. In the USA both Illinois and Minnesota have towns named New Trier that were founded by settlers from the area. 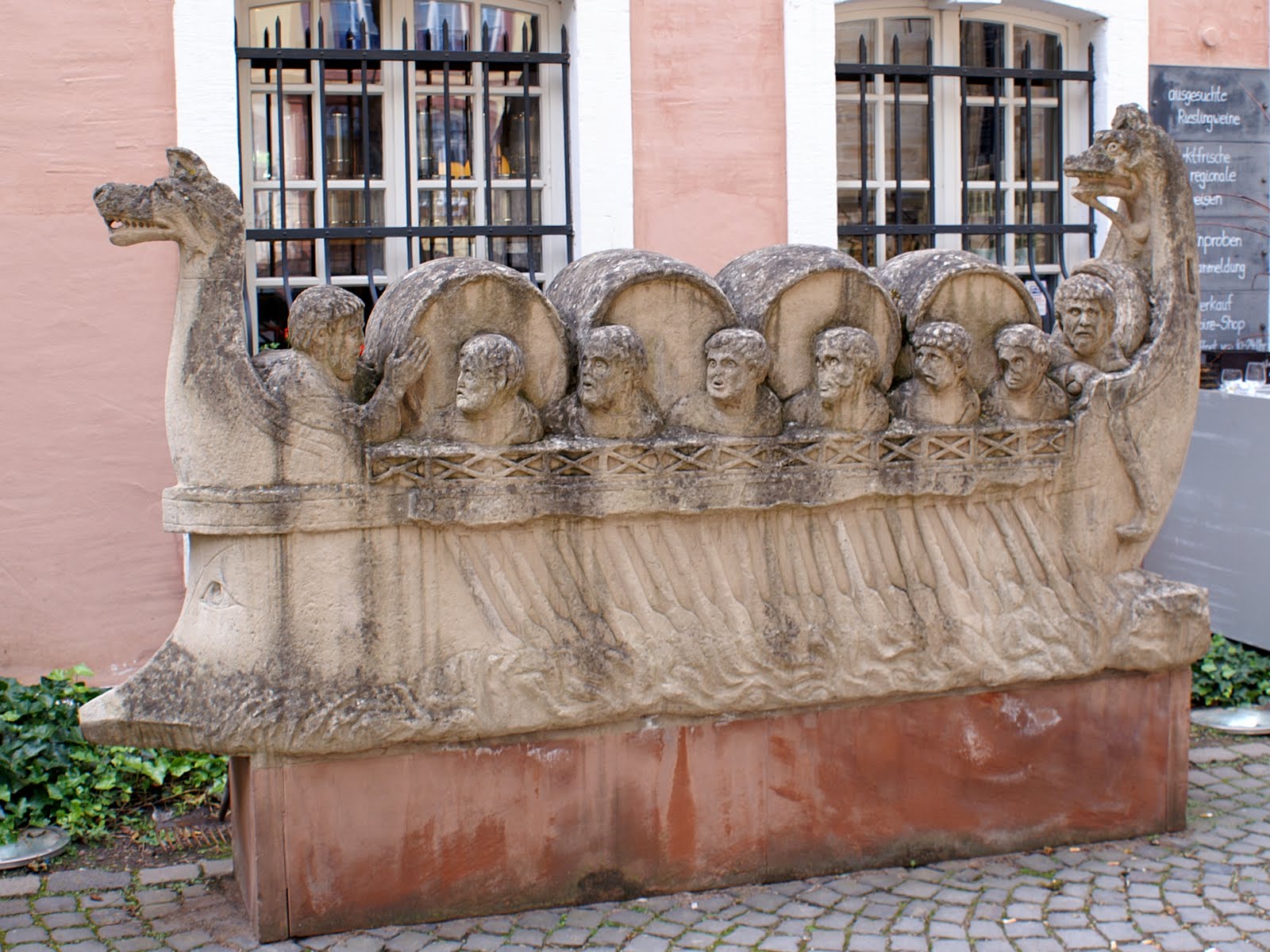 Evidence of the early and continuing importance of wine is preserved in the form of this well known statue outside the Liebfrauenkirche.

Certainly a city that required more time than we had.  I suspect that it really deserves a few days rather than a couple of hours.  I was however grateful to have been given the opportunity to photograph the whole panorama of the city and its valley from the great hill that overlooks it.

Posted by Philip Brian Hall at 15:30 No comments: 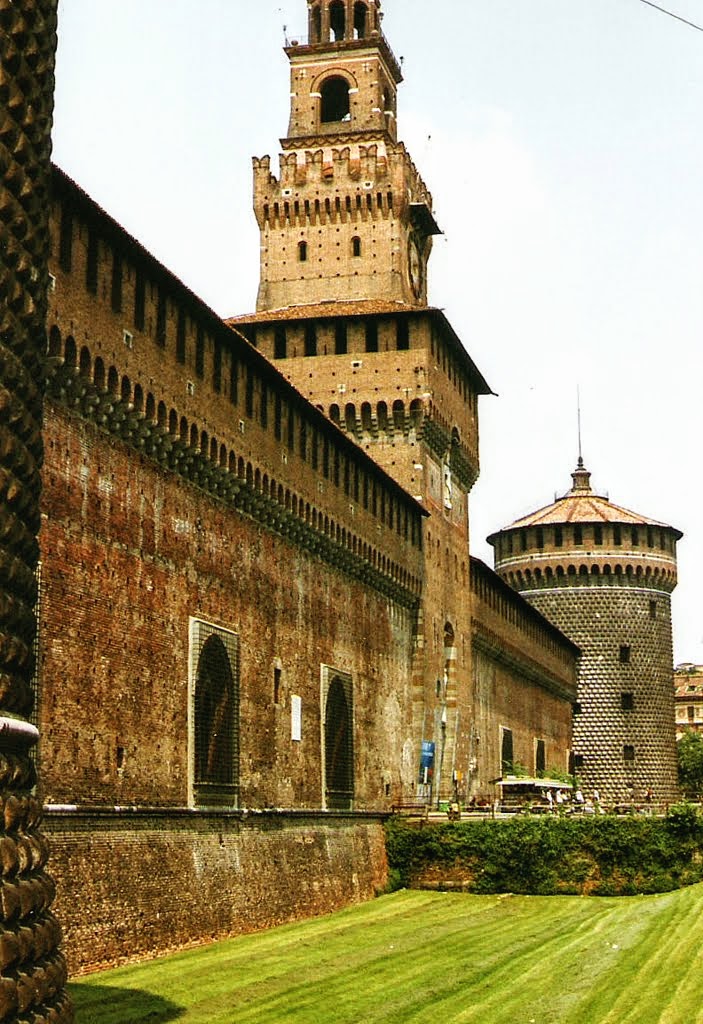 I am pleased to report that AE The Canadian Science Fiction Review has published a short story of mine entitled 'Spatchcock'.

Readers will doubtless realise that the story is a tribute to one of the giants of the cinema.  I was trying to show that his methods of creating and sustaining suspense and psychological drama need not be confined to modern world settings but work perfectly well in speculative fiction.  You will have to judge for yourselves whether I succeeded.

I will admit that it was great fun to write.  It is quite difficult even for the author of a work of detective fiction to keep his eye on the ball in a complicated plot.

And no, despite the date, this is not a joke.

I am particularly grateful to AE, which also brought my first commercially published fiction to the world last year in AE Micro 2013.

Posted by Philip Brian Hall at 11:27 No comments: