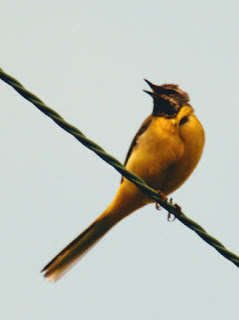 I was surprised to learn from the RSPB website that the estimated UK population of grey wagtails (motacilla cinerea) is only 38,000.

I first recall noticing these birds on Sliabh Mannan  several years ago. They frequent the margins of the Culloch Burn and in  the summer they are well supplied with insects of various kinds.  I don't actually know if they can catch midges on the wing like swallows and house martins, but if they can, good luck to them.  In the winter they leave the uplands and take refuge at lower altitudes near the estuary.

Anyway I've been struggling to take a decent photograph for years. Though larger than a pied wagtail these birds are still quite small, pretty skittish and, as their name suggests, terrible at sitting still. The reach of my 75-300 Minolta lens has not really been adequate, while my photography brain is still too slow and my old fingers too arthritic to achieve wonders with my entirely manual Sigma 400 mm. 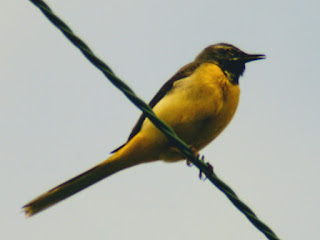 This year I have managed to acquire  an Alpha-type doubler lens to go with my recently acquired A580. Using this with the 75-300 produces a maximum aperture of f 9, which is too slow for autofocus but the camera can automatically raise the ISO when I'm struggling. This means that on aperture priority my only task is to focus manually, and I can just about do that, at least some of the time.

As a result I can now boast some tolerable, if grainy, stills of a grey wagtail!

Posted by Philip Brian Hall at 15:22 No comments:

Is there anybody out there who can count? 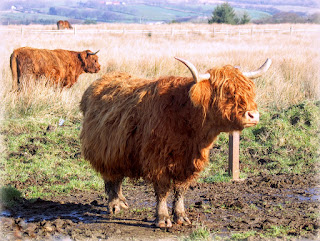 Those of us who, following the projections contained in the celebrated White Paper Scotland's Future, were not already convinced of the SNP's collective inability to count, should have been convinced by the First Minister's contention that losing her overall majority at Holyrood could be described as winning convincingly.

True, the SNP got more votes than anyone else, but that still left the anti-SNP majority very little changed from the Referendum almost two years ago. It would be nice to think that in the not too far distant future the nationalists' claim to a monopoly of Scottishness would be seen for the nonsense it is and attention could instead be returned to the delivery of public services. Health, education and law & order cannot indefinitely play second fiddle to the demand for constitutional change.

Meanwhile we can all turn our attention to the EU Referendum next month, where we are told by the SNP that it will be an outrage if Scotland is taken out of the EU against its will.

Let us leave aside for the moment the uncomfortable fact that Scotland as such is not a member of the EU, the UK is, and that if Scotland had voted to leave the UK it would therefore have been voting to leave the EU even more briskly.

What is interesting, given the tied opinion polls, is the prospect that a Scottish Remain vote might very well end up obliging the rest of the UK to remain in The EU against its will. Will this also be an outrage? I await enlightenment from the First Minister but I'm not holding my breath.

Although only a few months ago David Cameron told us we could prosper outside the EU and he would himself lead the Leave campaign if he failed to get reforms, we are now presented with the unedifying daily spectacle of (mostly foreign) experts and bigwigs lined up in an orchestrated fashion by the government to prophesy everything up to and including the Third World War if we are foolish enough to think of leaving the EU.

For some reason they have not yet got round to the plagues of frogs and locusts, but I expect they will if the poll numbers remain stubborn. 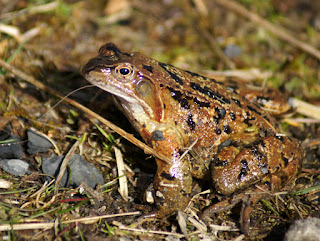 None of these foreign experts appear to appreciate the perverseness of the British character, which tends to make us more likely to do something, not less, when lots of people with a vested interest are all telling us not to do it.

For my part the key issue is the crippling burden of supporting the ill-starred Eurozone, of which the UK is fortunately not a member.

The Eurozone countries have an in-built majority in the EU and can out-vote the UK permanently, especially since Cameron's renegotiations gave up our right to veto Eurozone measures that are not in the UK's interest.

Already during the Greek crisis last year we have seen the Eurozone vote to use EU funds when non-Eurozone EU-members such as the UK were not even present at the table. In other words they voted for us to share a payment without bothering to consult us. Although a fudge was found to get round this when their abuse of power was exposed, it seems very likely to be a taste of things to come if we vote to remain.

No-one should be under any illusion that a vote to remain is a vote for the status quo. The status quo in the EU is not sustainable as the recurrent national insolvencies show. Despite the lack of a democratic mandate, the EU elite have no option but to pursue further integration, including political integration, for the Eurozone.

Woe betide those EU members who do not see this integration as being in their best interests.
Posted by Philip Brian Hall at 15:57 No comments: