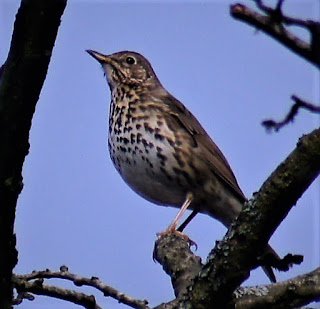 For many years, the only members of the thrush family I've seen around and about in Sliabh Mannan have been blackbirds (Turdus merula) which are numerous and great contributors to the melody of spring and summer birdsong. I wasn't sure why other normally common members of the family were not present.

One year I remember spotting a single redwing (Turdus iliacus) and I half remember a possible fieldfare (Turdus pilaris), but both were fleeting glimspes and not seen again.

However in the last few years song thrushes (Turdus philomelos) have appeared in a cutting of the old Slamannan Railway which has now been converted into a path.

The sides of the cutting are quite steep and the old railway was a single track, so the cutting is effecively a narrow ravine which, although 600 feet above sea level, is sheltered from the worst of the strong winds which can sometimes blow across the moors. The price of shelter is that the sun only peers over the southern side of the cutting fairly late in the morning, but by spring the temperature is usually not too bad even in shade.

So I'm happy to see these recent arrivals settling in and I hope they'll stay around the area.

Posted by Philip Brian Hall at 12:48 No comments: 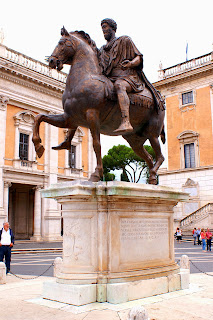 A United States of Europe has been advocated for centuries as a means of preventing European War. Even after the US Civil War demonstrated that war between federated states was by no means impossible, prominent European figures continued to argue for such a project.

The devastating wars of the twentieth century gave fresh impetus to the idea, and in the 1940’s the federalists effectively gained the upper hand over those who favoured looser associations such as the Council of Europe and EFTA. Recognising however that their ideas were well ahead of European pubic opinion, they agreed to a step by step approach towards “ever closer union”. The most recent step was the Lisbon Treaty of 2007, which effectively reintroduced the previously down-voted European Constitution under another name. It is under Article 50 of this constitution that the UK is currently negotiating withdrawal from the EU. A number of notable politicians have endorsed a United States of Europe in recent years.

However recent years have also seen a significant push back against the centralising tendencies of the European Commission in particular. Heavily indebted members of the Eurozone have been forced to accept major deflationary measures despite consequent heavy unemployment and popular discontent. Migratory waves have placed the open borders Schengen system under intolerably heavy political strain. Nationalist political forces have grown stronger in various member states.

To all of this the Brussels answer is more Europe, not less. For example the single currency won’t work properly without a common fiscal policy and to save the single currency from the pressures it has come under we must therefore remove the individual fiscal freedom of member states. The absence of a popular will for this is not considered an obstacle.

To some, European federalism is yesterday’s answer to yesterday’s problems. Aloof, remote government is no longer acceptable to populations who, in the information age, are far more in touch with alternative thinking on how their needs may be met.

This is not to say that the ideal of fraternity is not a fine one. However, if fraternity is to be realised, ways need to be found of making it compatible with liberty and democracy.
Posted by Philip Brian Hall at 12:33 No comments:

Why has Brexit proven to be so divisive?

Referendums are relatively recent innovations in the UK political system and we’re not really used
to them. They involve voters far more directly in political choices than do UK General Elections.

In the latter, because of our first past the post electoral system it is normal for the winning party to poll less than fifty percent of the vote; since the Second World War the only government backed by more than half the voters was the 2010-15 coalition and that involved two parties. Nevertheless, as long as a government can command a majority in the House of Commons no-one makes much of a fuss and it is allowed to enact radical policy changes such as nationalisation or privatisation, to change criminal and civil laws or indeed to sign foreign treaties such as the one which took the UK into the EEC in 1973.

Note also that all political parties can and regularly do make undeliverable promises and predictions during elections in an attempt to persuade voters to vote for them. To hear some of the post-referendum angst you would think no politician had ever misrepresented the facts before, whereas in fact it is the normal state of affairs and everybody knows it.

A General Election is a very blunt instrument, since countless issues may influence votes and campaigns are usually very diffuse affairs. A referendum by contrast focuses on a single issue which is itself resolved into a single yes/no question. It is a great deal easier to decide how to vote on a single issue than to balance up the various party policies with which you agree and disagree in order to decide which party overall is the best (or least evil). In spite of this no-one ever suggests it’s too difficult for the uneducated to work out how to vote in an election.

You perhaps begin to see that objections are made to the results of referendums which would rightly be considered absurd if made in the context of General Elections. Why is this? I suggest because emotions are much more thoroughly wound up by referendums.

The Scottish independence referendum was, for many who experienced it directly, a profoundly unpleasant and divisive process. It was, in the main, divisive because of the emotions that were in play, not because of disagreements about facts. However much we may rationalize our instinctive position, human beings are strongly driven by visceral loyalties. This quickly turns unlikely allies into ‘us’ while former friends may suddenly become ‘them’. When emotions are involved, rational dialogue flies out of the window and we may resort to strong language to describe people who disagree with us. This is reinforced by modern social media echo chambers in which we only talk to people who do agree with us, while the best we may manage with our opponents is to talk at them and shout louder and use more rude words if they don’t seem to listen. But in General and Scottish Elections there’s always a political choice available to the electorate between parties who do and don’t support independence. Not so with the EU.

By the 2016 EU Referendum, the electorate had been denied any say for over forty years as the EEC steadily morphed into the EU and the EU in turn began to transition towards federalism. All major UK parties supported EU membership. They mainly selected candidates who agreed with party policy; hence the House of Commons came to be dominated by those favouring membership. The UK government even signed a rebadged Lisbon Treaty without the promised referendum on the EU Constitution. In short, Eurosceptics never had a chance at any stage to record their objections to the changes in the EU. This built up a great deal of alienation.

So take the emotional and unusual environment of a referendum, heavily season with decades of denial of choice, mix well with issues of identity and democratic principles of self-government, throw in deliberate attempts to stir up emotions on all sides and don’t be surprised when you get bitter division. Naturally this division makes it much harder to accept the outcome of a referendum than the outcome of an election. Before you know it, the losers are demanding another one, just like Scotland.

I strongly believe that a European political class which had a better understanding of the people they governed could have avoided all this unpleasantness and found ways to head off the least desirable EU developments. But elites don’t tend to think that way.
Posted by Philip Brian Hall at 15:35 No comments:

Some of them did.

The name Scoti was originally a (4th century AD)Latin term for Gaels who raided Roman Britain from Ireland. By the 5th century these Gaels had formed a kingdom (Dalriada) which straddled the relatively narrow channel between north-eastern Ireland and south-western Scotland. However the country now known as Scotland was, in the Dark Ages, divided between these Gaels and several other races including Strathclyde Britons (Celts) forced north by the saxons(whilst other Celts remained in Wales and Cornwall), Norse moving south from Orkney and Shetland, Picts who occupied most of the central and northern highland areas and Angles moving north from Northumbria. A separate Viking group colonised Galloway. These disparate groups sometimes fought and sometimes didn’t.

Legend has it that in the mid-ninth century a Dalriadan king called Kenneth the Hardy was defeated in battle by the Picts, who were then attacked in the rear by a Viking army. The Vikings won, but as was their habit, then retired to the sea rather than holding the land. Kenneth’s army was now in better shape than the Picts and he was able to take over Pictish territory, becoming the first king of a united Alba (Dalriada + Pictland = just about all the mainland north of the highland line). Nowadays there is controversy about whether this amalgamation of the two kingdoms actually did occur by war or by dynastic marriage or some other process and not everyone considers Kenneth (MacAlpin) the first king of the unified land.

It took a lot longer for the lowlands (Strathclyde and the Lothians) to be incorporated into the kingdom and longer still for the Norse settlements in the isles of the west and north to be included too. Long before this process was complete it was complicated by the arrival of Normans who had already conquered England and who also invaded Ireland.

In the 17th century the colonisation process was reversed as protestants from Scotland were settled in Gaelic Ulster, which had been difficult to govern from the British side of the water.

The famine of the 1840’s set off more emigration from Ireland and significant numbers came to Scotland in a second wave of Irish settlement. Many got no further than Glasgow and surrounding west coast towns, most engaging in manual labour in the newly expanding industries.

So whilst numerous Scots today are of Irish descent, many others are descended from the various races that were amalgamated into the kingdom. These various strands are nowadays thoroughly mixed together anyway.
Posted by Philip Brian Hall at 13:13 No comments: