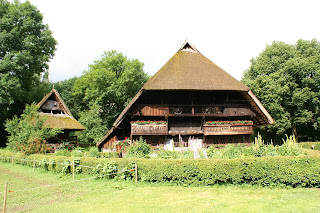 If you plan on visiting the Black Forest Museum at Vogtsbauernhof, try picking a day when it isn't going to rain. Like any open air site, this one is vulnerable to the weather, though you can shelter inside several of the buildings.

This museum is a reconstruction of a little Bavarian village. Houses of this type were still inhabited until the mid twentieth century, though most of them, together with the implements that have been brought here from all around the Black Forest are of much older construction. The Twentieth Century was slow to catch up with life in the forest. There is a mill and there are various workshops still in use. On the day of our visit two thatchers were working on one of the house roofs. At various times there are craft demonstrations. 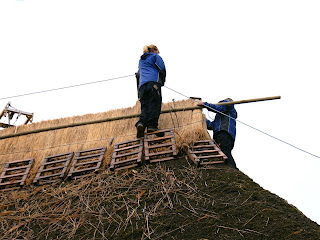 To say that you can immerse yourself in the past would be a trifle misleading. The village is too neat and tidy and somehow one can always tell when houses are no longer lived in. Of course you would expect to see far more people about in a real village; somehow tourists don't seem to count as real people for these purposes. However there are descriptive notices about the place to inform your visit and the buildings are complete and not ruined. It must have been a major labour of love to preserve and transport them all.
To have a physical connection with the way of life of former generations is so valuable. Too often we have destroyed what they left us as old fashioned or unhygienic, leaving our heirs nothing but pictures and descriptions. A vote of thanks is needed to all those who have worked to preserve a more tangible link.
Posted by Philip Brian Hall at 16:43