Castles of the Rhine Gorge 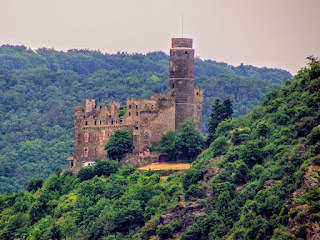 The Rhine Gorge does not have to work hard for its appellation of 'romantic'.  It was at the heart of the nineteenth century movement towards sentimental revision of popular conceptions of the past.  For the romanticist, the castles built by robber barons or political prelates aiming to extort money from the travellers and traders who passed up and down the river can so easily be converted in the mind's eye into fairy tale residences of beautiful princesses or chivalric knights.  Many of us seem to prefer our history with a large top-dressing of imagination and as few grisly details of reality as possible. 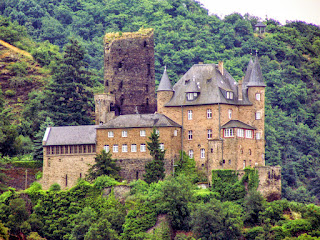 There are so many of these remarkable fortresses perched on the hills overlooking the waterway that tourists have probably forgotten their names within minutes of having first heard them. One castle even sits on an island in the river itself.  Did we really hear the guide pointing out Castle Cat and Castle Mouse?  Whatever happened to Castle Cheese?  (Burg Katz, right and Burg Maus, above left.)

Relatively few of the Rhine Gorge Castles seem to have been left in a ruinous condition.  Many are now hotels or tourist centres.  Bromserburg in Rudesheim is a wine museum. 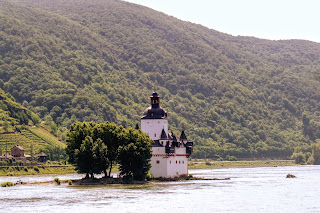 Pfalzgrafenstein (left) cannot be a mere customs post and so has to be a dungeon designed to keep a beautiful maiden away from her unsuitable lover.  Needless to say, it failed in this capacity, since no castle is strong enough to stand against love.  At least that's they way it usually works out in the fairy tales. 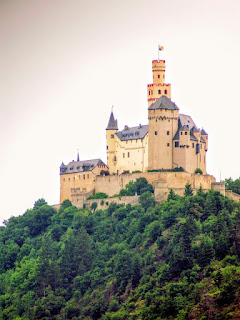 Of course the most fairy tale of them all, at least in appearance, has to be Marksburg (right) not too far south of Koblenz.  If ever there was a fortress designed to feature in story books and epic films this must be it.  From a distance it is quite simply perfect.  I found it remarkably difficult to photograph without a rose tint invading even my camera lens.

Mind you, the medieval baron who allowed the field of defensive fire to be quite so badly overgrown would probably not have held on to his castle for long.  Now would the present author have cared to be involved with the digging of the well to supply this eyrie with water.

As for the maiden who lived at the top of the tower, she probably froze to death.   There's never a handsome knight on a white charger around when you need one these days.
Posted by Philip Brian Hall at 15:26